Pushed to the Side

by The Coal Men 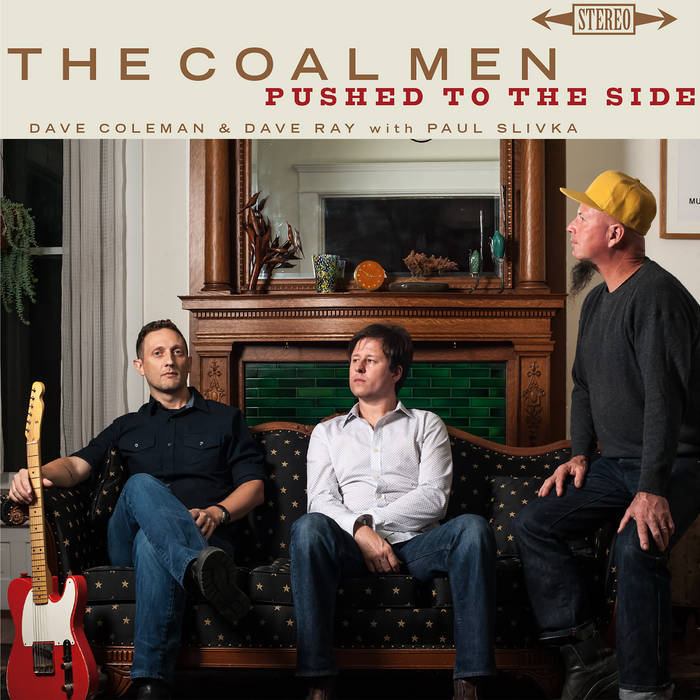 NASHVILLE ROOTS-ROCK TRIO THE COAL MEN
MINE LOST SOULS
ON PUSHED TO THE SIDE, RELEASING AUGUST 19, 2016

NASHVILLE, Tenn. — As excited as Dave Coleman is about the August 19, 2016 release of Pushed to the Side (Vaskaleedez Records), the fifth full-length album by his Nashville roots-rock trio the Coal Men, he’s also harboring an unusual fear: that the story of “three solid dudes trying to make really honest, genuine music” isn’t sexy enough to pique journalists’ fancy.

Please, Mr. Coleman, have a little faith. Truth is, there are plenty of angles here, including several in these excellent songs (which we shall explore in a bit, perhaps starting with the sad electric twang of “Faithless Eyes”). But it’s not as if the Coal Men’s history lacks for hooks. For starters, guitarist/vocalist Coleman and co-founding drummer/vocalist Dave Ray have been together 17 years; Coleman’s also played with artists including Matthew Ryan, Jessi Alexander and a young Taylor Swift. Bassist Paul Slivka, who joined five years ago, gained fame with Tommy Conwell & the Young Rumblers; he’s worked with Tony Joe White, Tommy Womack, Amanda Shires and Elizabeth Cook, among others. Most Tuesdays, he appears at the Family Wash with his wife, Cole, host of the “Short Sets” songwriter series. Coleman’s a regular.

And a band mentored by both John Prine and Todd Snider must have plenty of anecdotes about those experiences (even if some must remain, um, unreported). Prine helped distribute the band’s Bob Delevante-produced debut, 2004’s Nowhere’s Too Far, on his Oh Boy label; Snider pushed their 2013 album, Escalator, via his Aimless Records, then took them out on tour. They’ve also opened for the Avett Brothers, Darrell Scott and Chris Knight, among others.

Then there’s that Delevante link: in the ’90s, the Delevantes were at the forefront of the burgeoning Americana movement. Coleman, now producing at his own Nashville studio, Howard’s Apartment, recently shared a full-circle moment by helping Bob Delevante produce his new album there; he also plays on it with Ray and E Street Band bassist Garry Tallent. Coleman and Delevante also co-wrote Pushed to the Side’s sweet “Stones River.” “He’s been a father figure to me, teaching me a lot about how to treat people and handle the music business,” Coleman says. “That song is a metaphor of that kind of connection.”

Another hero, Buddy Miller, is also an advocate. Early in Coleman’s career, he played bass in his guitar teacher Duane Jarvis’ band, which opened a Buddy and Julie Miller tour; after Buddy became music director of the TV show Nashville, an Escalator track landed in an episode. Sons of Anarchy also featured two Coal Men songs, and their “Farther Find Me Now” heightened a key moment in the reality show The Deadliest Catch.

It’s just watery coincidence, however, that the band makes seven Key West trips a year for week-long residencies at the famed Hog’s Breath Saloon, a nearly 12-year tradition that began with an invitation from the Mavericks’ Paul Deakin and Robert Reynolds. The trio tracked Pushed to the Side during a stay on Florida’s tip, at Lance Taylor’s Southernmost Studio.

“We were playing really well together, very much in sync,” says Coleman, who produced. “We were also pretty exhausted from those four-hour sets. I think that helped us settle into these atmospheric and moody tunes.”

They’re atmospheric and moody, all right; their protagonists forlorn, displaced, drifting. Coleman wrote them solo or with co-authors including Stephen Simmons, Seth Timbs and Jeff Wickland — a lover of Southern Gothic tales who shares credit for the lost souls of “Willy Jett,” “Lilly Hurst” and “Travis.” Their lonely spirits hover throughout the album.

“It’s not a concept record,” Coleman explains, “but the narratives of being pushed to the side, of being on the fringe or alienated; they’re part of the story of the record.” That includes the Nashville experience itself, as intimated in “The Payoff,” a faster-pulsed twanger about trying to break through in a town where too many people make music for the wrong reasons.

Cynicism also infuses much of “The Singer (in Louisville),” which Coleman based on a story Womack wrote for Based On: Words, Notes and Art From Nashville, a book/CD collection of stories, songs and images inspired by one another. Coleman produced the music (contributors include Phil Madeira, Griffin House, David Mead and Brooke Waggoner) and knew the electric friction of the Coal Men’s “The Singer” belonged on Pushed to the Side.

The Bakersfield-nodding “Speeding Like a Demon,” which Coleman calls “total hillbilly,” conveys the flip-side “comical craziness” of road life. “It’s our homage to Jason & the Scorchers, taking traditional country but revvin’ it up in a three-piece rock ’n’ roll band that’s influenced as much by Hendrix as Hank or Webb Pierce.”

A beloved van serves as the metaphoric vehicle in “Depreciate,” which ponders fate with an understated jazz/twang. “It’s really about growing older gracefully, and trying to find your self worth,” Coleman admits. “That’s part of what this band has tried to do. We’ve always been committed to being who we are and not chasing trends.”

Though Escalator featured A-list Nashville talent, Coleman avoided guest stars this time to focus on production for the trio. Half of the tracks contain only vocal overdubs; others received slide guitar, pedal steel and similar shadings back at his home studio. “I wanted to embrace the air; there’s moments where there’s just color, like a triangle note. I tried to be deliberate, to play the right part for the song.” He says. “That’s my mantra.”

An expressive baritone vocalist (he claims Tony Joe White as an influence), Coleman also loves baritone guitar, which he applies to great effect on the title track. Its snaky tempo sets a groove that drives lyrics bound to break the hearts of sensitive listeners. But the album’s dark moments are buoyed by tunes like “Fast Rider,” a sexy, funky ode to his wife.

“We’re just telling stories,” Coleman says. “And it felt good to tell these.”

The Coal Men’s story starts in Jamestown, in rural East Tennessee, where Coleman grew up near the Big South Fork National River and Recreation Area. He thought he’d join his mother as a park ranger, but once he hit the stage in a local band, music took over. Switching to country when the town’s few rock bands petered out, he fell in love with Marty Stuart, Dwight Yoakam and Billy Joe Shaver. In 1997, Coleman headed to Belmont University in Nashville; he also began studying with Jarvis, Yoakam and Prine’s go-to guitarist. At 20, Coleman got hired to write songs for famed publisher Acuff-Rose Music. He also birthed the Coal Men with Ray.

“I had all these songs and nobody else was gonna sing ’em,” Coleman explains. “So I started a band to showcase them, and somehow, we’ve carried on for 17 years.”

The Coal Men Pushed to the Side

But you, don’t let it get you down
No you, stick out your neck to a cut throat town

So what’s it mean to make the scene
Dress yourself so squeaky clean
Desperate to take one for the team
Another star that wants to shine
Twice as bright for half the time
Who’s place are you holding in line?

But you, don’t let it get you down
Yeah you, stick out your neck to a cut throat town

Willy came down, from the coal camp
So he could have some fun
He needed some time, so he could unwind
After a week of work was done

He nearly works himself to death
at least that’s what he said
But after a night of drinkin’, sippin’ and sinkin’
He nearly woke up dead

CH: A child at play
Expectation and regret
Those where the ways
Of Wanderin Willy Jett

Willy came down from the coal camp
He saved two weeks of pay
Bought a new suit of clothes, pinstripes and rows
Trying to hide the worn out away

Cause you get me baby
And I get you
You seem to love me honey
Makes me love you too
I think I love you too, one two


Travis lived cross town by the railroad track
Just him, his dad, and four dying walls of a shotgun shack

His mind was restless it ached and it growned
He walked this town, head hung down, most days he stayed stoned

Dogs found him laying by the trestle out in the rain
Wasn’t much left, his old flannel, just torn and plain

He’d walked out alone deep into the black
Travis and a thirty eight, the night he never came back

The town swore we would change, but life goes on
Few years went by, fuss died down, 'til we all forgot he was gone

Now we all drive by that rail road track
And few recall the boy Travis, and the night he never came back

Late for a gig in Jacksonville
Ain't gonna make that dollar bill
as I pull into the station
Eat my junk food, drink an "Oca-Cola"
Three quarts low past Pensacola
Trials and Florida First Nations

Pounding rain, orange cones, engine wines, the engine moans
Speeding like a demon to get to the show

Dotted lines, yellow lines, highway signs, and power lines
Speeding like a demon to get to the show

Pounding rain, orange cones, engine wines, the engine moans
Speeding like a demon to get to the show

Dotted lines, yellow lines, highway signs, and power lines
Speeding like a demon to get to the show

I’m on my way, just another day and I’ll be
Far from strong, but long gone from her name

Given to her at birth, letters that make up one word
That would prefer to never say again

There’s things that tie her to me, a thing that will always be
So that we can never change or even try to deny

A name that she & I chose, letters all in a row
That a young son will forever be defined

The singer is back in Louisville
He's always been here somewhere on a bill
And good you know, In fact a favorite
Lord his guitar and the way he plays it